Is Drinking Water Before Bed Really Good for You?

When you’re thirsty, you get a glass of water. You’ve always done it, and you’ve never been told there’s anything wrong with it. How could there be? It’s water, after all. There’s an endless list of benefits water has for your body and mind. So it may come as a surprise that drinking water before bed has raised some questions.

Whenever you’re thirsty, it’s pretty much safe to grab a glass to gulp down. But what about drinking water before bed? Why has that, of all things, had an apparent negative impact on people?

Lately, there’s been some controversy and discussion about whether or not drinking water before bed is bad for you. This has come as a surprise to many of us, considering we’ve always held water in such high regard for its healthful benefits and its cleansing abilities. But there might actually be something to this theory.

According to a study by Australian Family Physician, drinking water helps with weight loss. They even went on to say that drinking water before bed will eliminate the urge to get up in the middle of the night for a snack. But the issue is more complicated than that. Where there are pros, there are cons.

Why is Water Good For You? 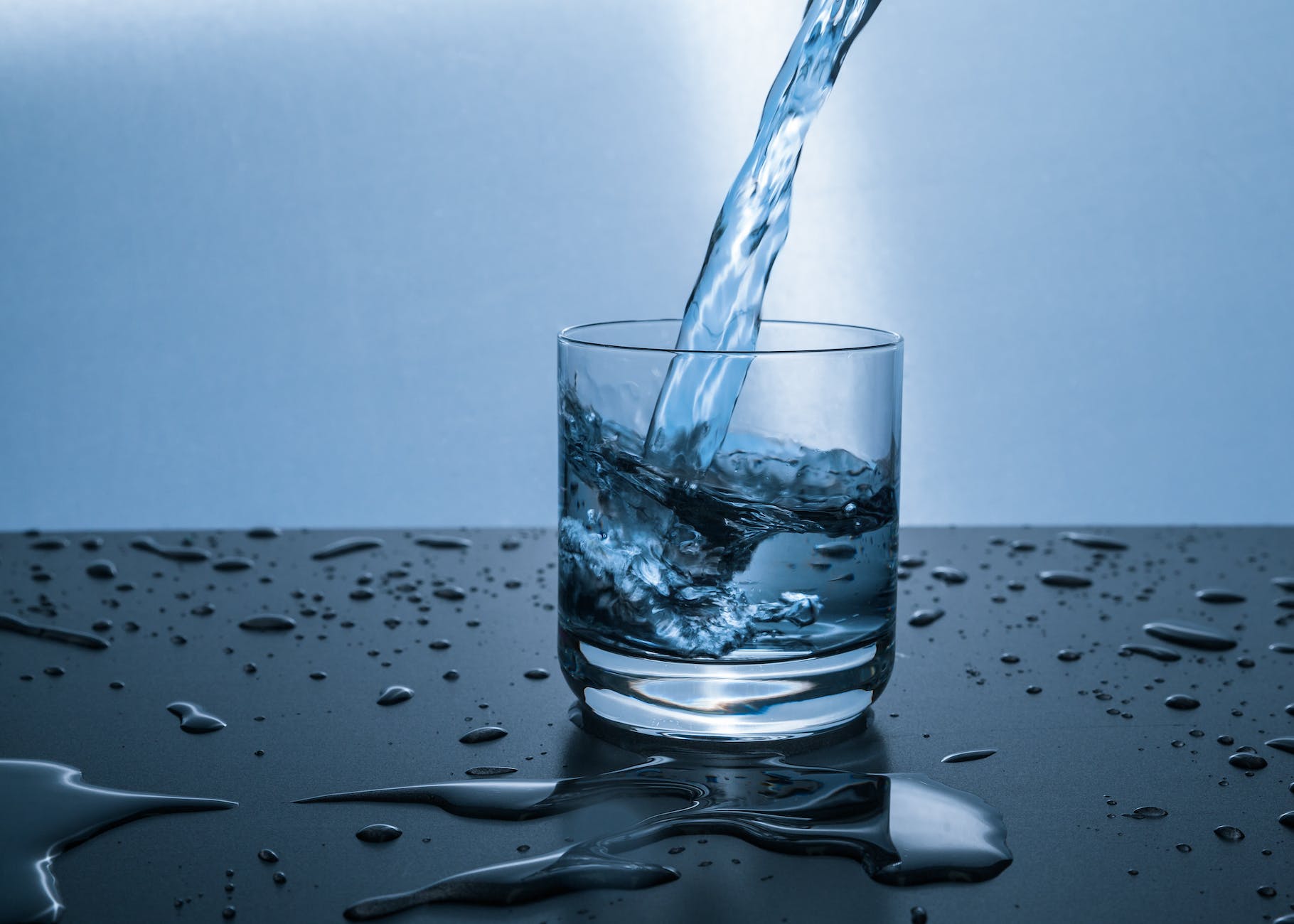 There are plenty of reasons to drink water. Obviously, it’s the best way to quench your thirst. But growing up, we’ve all been told over and over again that it’s more than that: it’s essential. Aside from quenching our thirst when our mouths are dry, drinking water is how we cleanse our bodies. Water helps to carry many toxins out of the body by aiding the kidneys with filtration.

When you wake up in the morning before your cup of coffee, try drinking a glass of water or two and see how you feel. Water actually helps us with energy, since your brain is made up of mostly water. Drinking water will help boost concentration, energy levels, and will reduce fatigue throughout the day.

Your organs will thank you

Just like your brain, your organs benefit from drinking water. Dehydration stresses your body, and stress weakens the immune system. So maintaining adequate hydration can help to keep your immune system running as it should.

Your joints and muscles are greatly lubricated by drinking water, which prevents things that make moving around painful. Cramps, joint pain, and sprains are less likely to happen when you’re fully hydrated.

These illnesses aren’t the only things that water can help you with. Do you suffer from frequent headaches? If so, the most likely cause is dehydration. Drinking water is known to reduce all kinds of headaches, even migraines.

As water circulates throughout your body, it is absorbed by every tissue and organ it passes. It’s even absorbed into your skin. This is great for moisturizing and reducing aging signs like wrinkles. The more water you consume, the more your skin will glow.

Perhaps the most pertinent is how water promotes weight loss. Water isn’t an automatic weight loss solution, but hear this: whenever you’re craving a cold beverage like a soda or a juice, by replacing it with water instead, you’re cutting out a significant portion of daily caloric intake. Water also helps you to feel fuller if you drink it at mealtime.

Although there are myths about just how much water you should drink per day, there’s no doubt that going without it for too long has dire consequences. So, again, why is drinking water before bed anything but good for you? 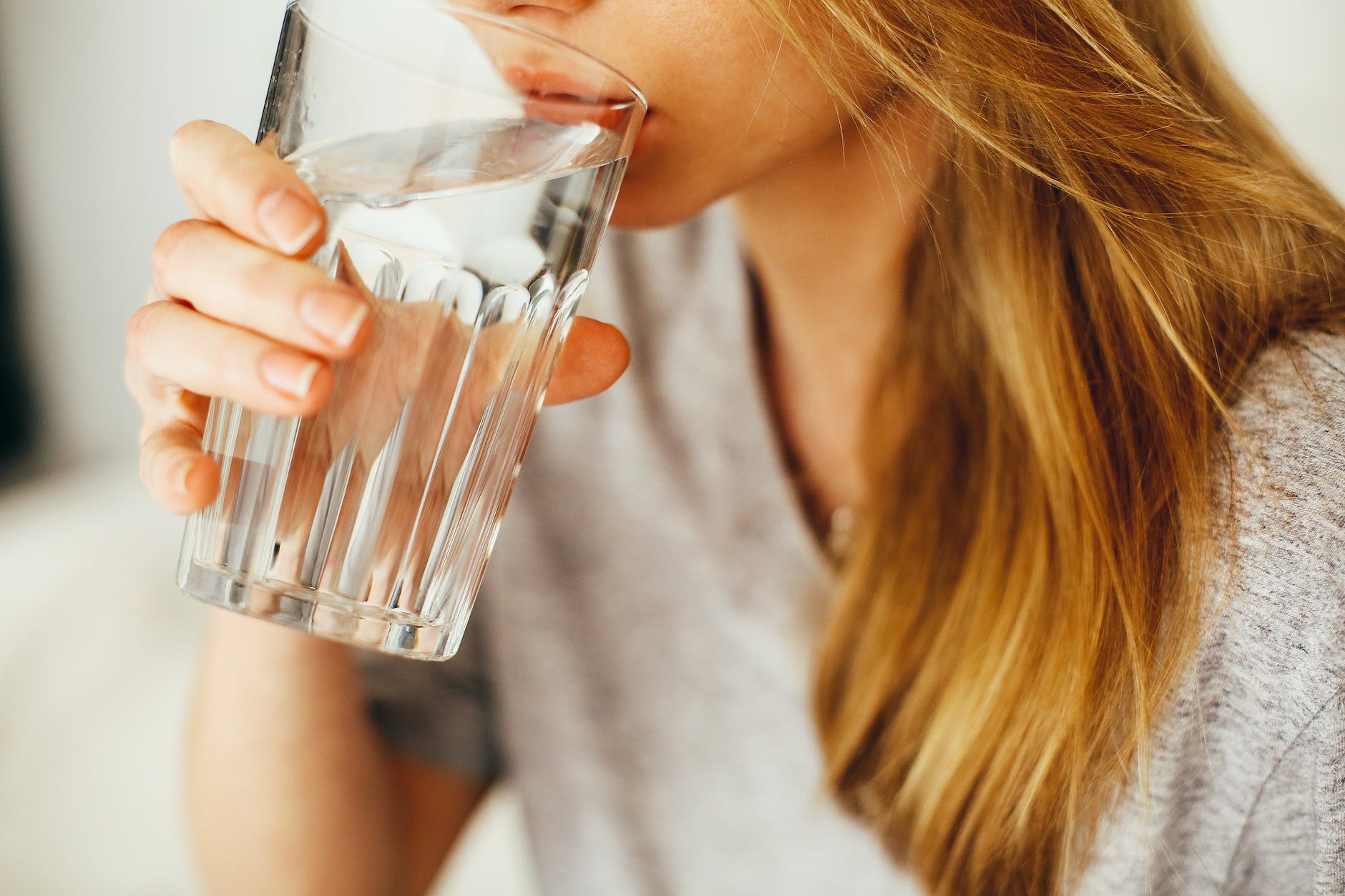 Nothing beats a cold glass of water in the morning. But did you know that drinking cold water could produce thicker mucus that may make it more difficult to breathe? Thicker mucous has a harder time passing through the respiratory tract, but is it true that cold water could really have that effect?

The difference between drinking warm and cold water certainly has something to do with the drinking water before bed debate. It affects our breathing, so maybe we should be careful about drinking it before laying down for a snooze. It would seem that if you must have a drink of water before bed, maybe a glass of warm water won’t hurt.

Unless you’re worried about frequent urination and lack of sleep.

The Cons of Drinking Water Before Bed 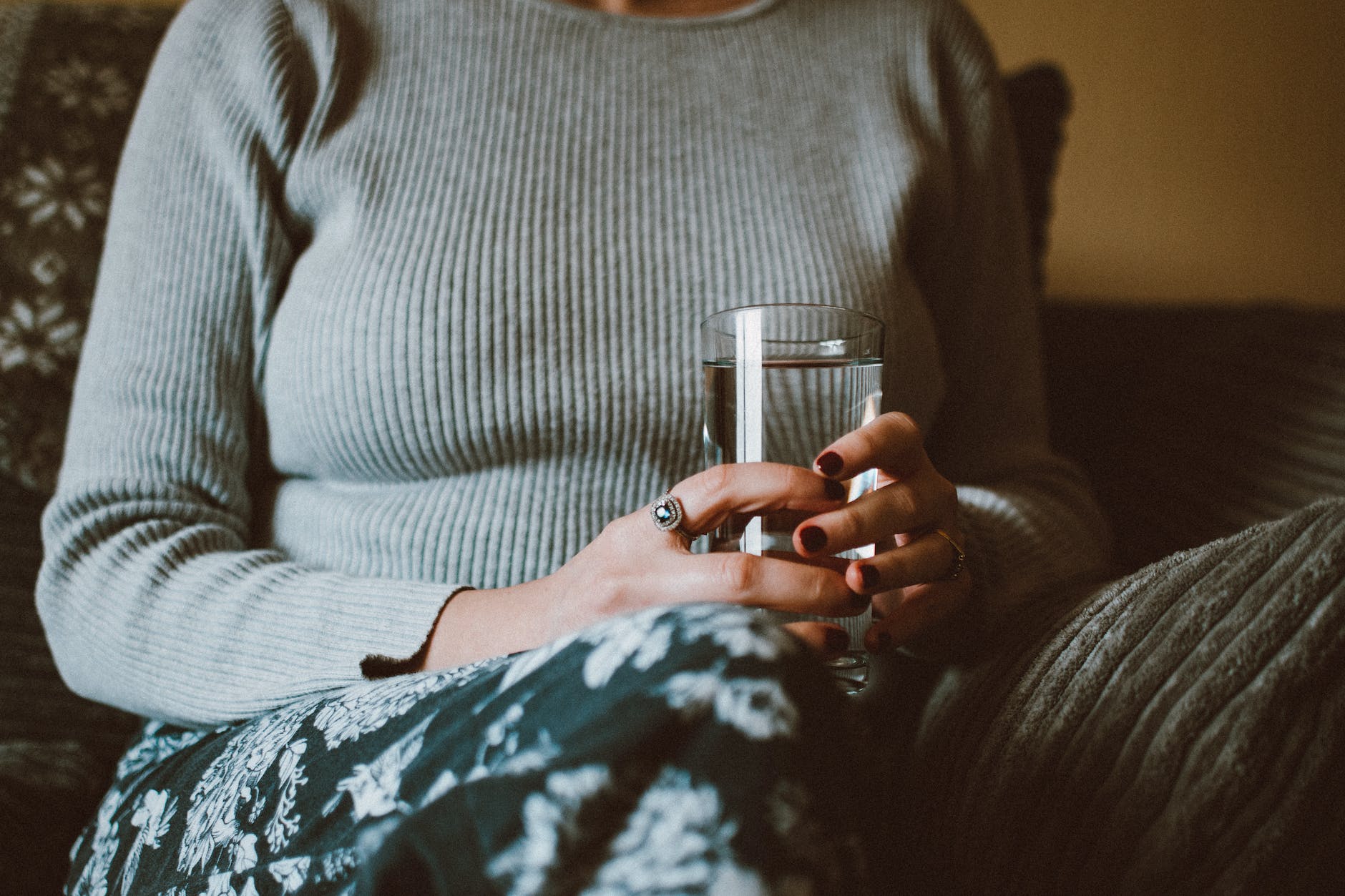 What goes in must eventually come out. And if you're drinking a lot of water, your body will, eventually, need to release it. Your body is constantly working to get rid of waste and doesn’t usually take a break -- not even when you’re asleep.

Drinking water just an hour before you hit the hay means that at some point during the night (if not multiple times), you will have to get up and go to the bathroom. If you make a habit out of this, it could disturb your sleep pattern. If you’re waking up tired every morning, it just might be those frequent bathroom visits.

Lack of sleep is more than just annoying. It can be detrimental to your weight loss goals. You need the energy to burn fat, and daily fatigue will only make losing weight, or daily life for that matter, extremely difficult. There have already been studies showing exactly why lack of sleep contributes to those who have a harder time losing weight.

So remember, drinking water before bed means you’re telling your body to keep working while you rest.

When frequent urination gets to a dangerous level, it can cause an ailment known as “nocturia.” Nocturia is when frequent urination gets so bad, it happens every night -- usually multiple times a night. This is when drinking water before bed becomes a serious health issue. It’s easy to get into bad habits, like drinking water before bed. But when they reach the point of becoming a health issue, it’s time to consider a change.

Nocturia gets more common as you grow older. There are several different kinds of nocturia: polyuria, nocturnal polyuria, and low nocturnal bladder capacity. Symptoms of each type of nocturia start with greater than normal volumes of urine or the inability to hold your urine in at night.

About two liters of urine a day is usually a sign of polyuria, the most common form of nocturia. If you are producing more urine at night when you’re trying to sleep than you used to, then it could be nocturnal polyuria. If you are unable to hold your bladder while you sleep (i.e. like those who pee the bed), it’s a sign of low bladder capacity.

When suffering from symptoms of nocturia, you should consult with a doctor. Nocturia could be a sign of something more serious, like diabetes. So, keep that in mind. But the usual cause of nocturia is drinking water before bed to an excessive amount. Your body gets so used to you choosing this time to drink water and thus going to the bathroom that it develops a habit of its own.

As we stated before, drinking cold water could thicken the mucus in your throat. This could make breathing just a little bit more of a chore. Now drinking cold water before going to bed is a little bit worse. Imagine trying to sleep with while not being able to breathe as well. Those who already suffer from sleep apnea and other breathing problems could tell you that trying to sleep with those conditions can be a pain.

The Pros of Drinking Water Before Bed 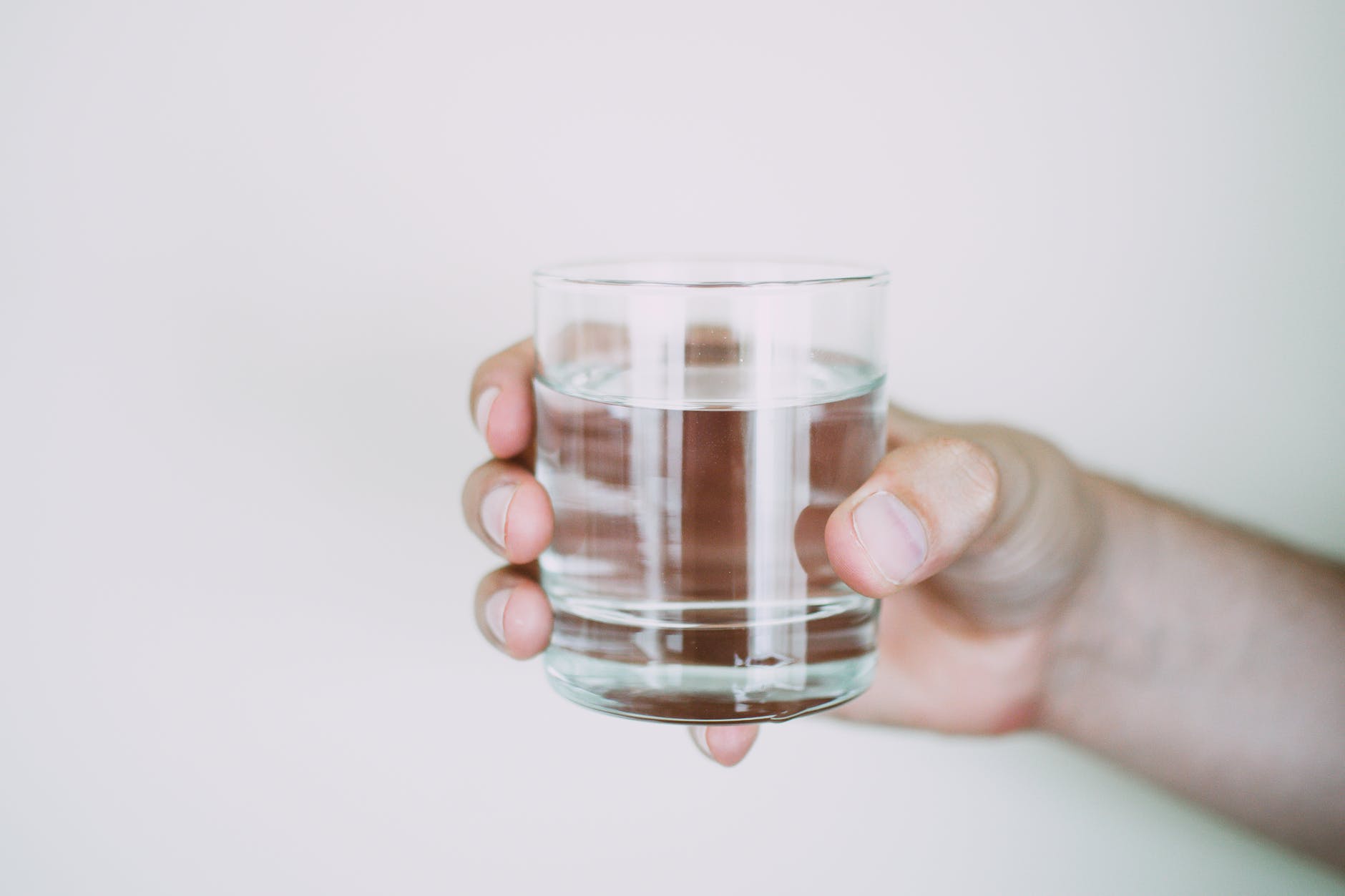 Let’s review: Drinking water can help to reduce the risk of a heart attack, as well as help you to reach your weight loss goals. The clean magic of water not only gives you energy and clarity, but it can actually prevent a lot of different illnesses -- some as serious as cancer. So maybe drinking water before bed isn’t as bad as some say. Especially if we try drinking warm water instead of cold.

Positive mood while you sleep, dream, and wake

A 2014 study showed that not drinking enough water might be the cause of your bad mood. They tested dozens of people. Some were well hydrated and some were not. They then allowed them to sleep. The next morning, they evaluated the subjects on their well-being. Those who were fully hydrated from the night before were in much better, more pleasant moods. Alternatively, those who were not well hydrated were not having as good of a time.

Interestingly enough, those who were dehydrated in the morning were given water the next morning, and their moods increased significantly in a short amount of time.

Drinking water works miracles for your body. By drinking water throughout the day, you help your body in removing toxins and excess waste. What you can do to give drinking water before bed a positive twist is heating it up a bit.

Drinking warm or hot water before bed has a number of benefits. For starters, warm water helps with circulation and blood flow, which can greatly help to remove waste from your body. As a bonus side effect, that warm water and increased blood flow will help regulate body temperature. It will keep your body heated during the winter months and nice and cool during the summer. Drinking warm water during the night may cause you to sweat, but you’ll feel great the next morning as that removes excess salt and toxins from your body.

If you don’t like the bland taste of water, here’s a win-win for you: try squeezing a lemon into your glass of water. A hot glass of lemon water not only tastes great, but it enhances the positive effects of water. Chock-full of vitamin C, the warm lemon water will have an incredible boost to your immune system.

If you suffer from pain during the night, drinking warm water before bed may have a lot of positive effects for you. Things like cramping and stomach pain will be alleviated throughout the night as the warm water cleanses your body. You will also stay hydrated, so you won’t need to get up in the night for a refill.

When Should You Drink Water?

Drinking water before bed may not be a good idea, considering the cons somewhat outweigh the pros. But there is a way you can get all those benefits without sacrificing a good night sleep. It’s up to you to decide, but finding the best time during the night to drink a warm glass of water will make all the difference in the world.

If you aren’t sure just when drinking water before bed is a good idea, just make sure you get the recommended minimum amount of cups a day. That's typically eight cups a day. Ask your doctor for a more accurate recommendation. But we think it’s safe to say that if you drink a glass of warm water two hours before going to sleep that, not only will you reap the benefits it provides, but you’ll also miss out on some of the pitfalls of drinking water before bed.