In recent years, apple cider vinegar has taken the health and wellness community by storm. Its monumental rise has been attributed to new research that has uncovered its many benefits. Among them is the claim that apple cider vinegar can help shed stubborn body fat, drop blood sugar levels, and aid in digestion and even cognition.

Clearly, there is a lot being said about this potential “superfood”. But extraordinary claims require extraordinary evidence, which is why we have dug through the research to find out the many benefits to supplementing your diet with apple cider vinegar. And we won’t lie—the results were staggering.

If you want to know how to lose weight fast, you will need to get up to speed with the latest research on apple cider vinegar. Luckily for you, we put together a comprehensive guide to keep you abreast of everything you need to know about apple cider vinegar for weight loss.

Apple cider vinegar (sometimes referred to as “ACV”) is a variety of vinegar made from—you guessed it—the cider of fresh apples. This gives it a nice amber tint, resembling that of beer or juice. As a culinary item, it is regularly used in salad dressings, marinades, vinaigrettes, and chutneys (Pro-tip: apple cider chutney is one of the best burger toppings out there!).

Like normal vinegar, it undergoes a fermentation process. This means that live bacterial cultures are used to produce it. However, unlike regular old vinegar, we would not recommend this as a household cleaning agent. That is simply no way to treat a superfood.

In essence, healthy bacteria and yeast are added to the cider of apples. This starts off the fermentation process whereby the sugars are converted into alcohol, which requires several weeks to complete. Then, a second fermentation process turns the alcohol into acidic vinegar. The acidity of the liquid is what gives apple cider vinegar its distinctive sour taste.

What’s the Hype About?

Apple cider vinegar has long been regarded as a natural remedy, or alternative medicine, whose acidic nature could help treat casual illnesses. Organic apple cider vinegar, which is unfiltered and unpasteurized, is sold with the “mother of vinegar” still intact. This is a bacterial culture resembling a cob-web that is widely considered to be healthy for the digestive tract.

We hear this all the time—that apple cider vinegar can cleanse your system. At first, we were skeptical. But after extensive research, we found a wide body of evidence to back this claim up. 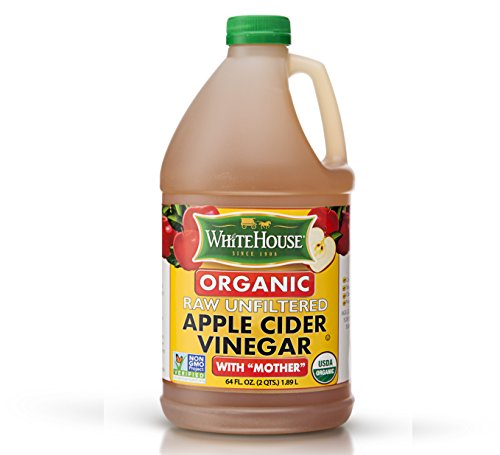 Research conducted on animals has demonstrated that acetic acid, the kind found in apple cider vinegar, improves the liver’s ability to absorb sugars from the blood. This is important, as high blood sugar levels have been closely associated with obesity and high BMI scores. And, perhaps even more importantly, the liver is the most critical organ in the body when it comes to detoxification.

Further, new studies have shown in rats that acetic acid can significantly lower the ratio of insulin to blood sugar. Insulin is a hormone naturally emitted in response to spikes in blood sugar, and it is also linked to the acceleration of fat tissue growth. In other words, the acid found in apple cider vinegar can prevent the development of fat cells.

Lastly, apple cider vinegar can supercharge your metabolism. In a recent study, it was proven that animals who are exposed to apple cider vinegar end up with elevated levels of fat-burning enzymes, such as “AMPK”. These enzymes serve two main functions: to decrease the production of fat and to help your gastrointestinal tract process the food you eat. Pretty cool, huh?

With its massive rise in popularity, the apple cider vinegar detox has caught on as one of the latest trends in the health and wellness world. There are many variants to this fad diet, and, to tell you the truth, we do not recommend any of them.

It is not that apple cider vinegar is a sham, but rather that it is simply too acidic to rely on exclusively. For example, we have heard of dieters who have drunk nothing but apple cider vinegar for up to an entire week! This is unhealthy, and potentially even dangerous.

Since the acetic acid content of apple cider vinegar is so high, going on long-term “detox” diets while drinking it can seriously disrupt your stomach’s ability to process food. With so much acid, it can augment your pH balance in your gut and prevent your body from being able to process food normally. This is never good.

How to Add Apple Cider Vinegar to Your Diet

We think that apple cider vinegar belongs in every kitchen. Even if there were no health benefits associated with it, we think it adds a nice flavor to otherwise bland dishes. However, it is not always clear how exactly you can incorporate apple cider vinegar into your diet.

Okay, okay, this isn’t much of a recipe. But it sure does make it easy to get your daily fix in. With every meal, you can enjoy a tall glass of apple cider vinegar straight. Just be warned, the strong sour taste is definitely not for everyone. You should also note that some medical professionals warn against the risk of drinking too much given its acidity, so don’t get carried away with it.

This deluxe punch recipe is nothing like any other you’ve ever had. Known to some as “fire cider”, this drink consists of blended horseradish, garlic cloves, onion, ginger, rosemary, and organic honey all in a water and apple cider vinegar base.

You could call it a juice, smoothie, or punch. But we call it (surprisingly) delicious, and the perfect pick-me-up for those days when you’re feeling under the weather.

Ever had deviled eggs and thought, “you know what would make this better…apple cider vinegar”. Well, neither have we. But trust us, once we tried it, we never went back. Next time you make deviled eggs, try splashing a few tablespoons of apple cider vinegar onto the brine. It’ll rock your world, and it is super healthy to boot.

Believe it or not, you can add apple cider vinegar to your standard bottle of ketchup to turn it into super ketchup. Most supermarket brand ketchup are loaded with sugars and artificial ingredients, so adding some apple cider vinegar can add some much-needed goodness to it.

To make it, simply stir in a half cup of apple cider vinegar with tomato paste, and throw in onion powder, oregano and sea salt for good measure. Voila! You have turned something delicious into something, well, delicious-er!

Tired of the same old, same old when it comes to making your lunchtime salad? Spruce things up a bit by adding a dash of apple cider vinaigrette. Really, this could go well with just about any vegetable salad. But we recommend crunchy kale and butternut squash to complement the sour vinaigrette.

When in a pinch, apple cider vinegar makes a great addition to many basic dishes. For example, you can splash it on steamed vegetables or sautéed greens, or you could use it as a marinade for tofu, red meats, or meat alternatives.

Nothing ring a bell for you? You can try adding apple cider vinegar to soups and chilies. Or, for the more experimental out there, you could add it to popular cocktail drinks like Bloody Mary’s. And if boozy drinks aren’t for you, no worries, because apple cider vinegar is equally delicious in a glass of orange juice or lemonade.